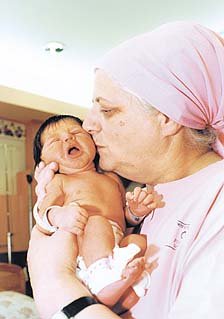 Rachel Bamberger Chalkowski, affectionately known by thousands as Bambi, is the legendary midwife of Jerusalem.  Over her distinguished fifty-year career at Shaare Tzedek Hospital, she has delivered more than 35,000 babies. However, Bambi’s concern for families extends far beyond the delivery room, and she has devoted her life to to helping Israeli families in crisis.

Bambi herself is no stranger to the struggle for survival.  As a child in France, Bambi fled from the Nazis and spent the war in hiding.  After the war, her family was “adopted” by an American family whose generosity kept them afloat.

Determined to be part of building the new Jewish state, Bambi immigrated to Israel by herself, when she was still a teenager.  There she began a lifetime of service devoted to her people- first as a nurse and chief midwife at Shaare Tzedek, and later as the tireless force behind the tzedaka that she founded, Matan B’Seter Bambi.

“It all started with a phone call from friends in Switzerland during the Yom Kippur War (1973).  Everyone was petrified by the direction of the war because it seemed that everything was lost in Israel.  They wanted to do something for Israel.

“I suggested they start a little tzedaka project because as it says, charity saves a person from death.  So my friends’ small community in Lucerne decided to adopt three Israeli families who were in great financial need by giving them the equivalent of 100 dollars each month.  This was the beginning of the organization ‘Matan B’Seter (anonymous giving) Bambi.’

“Fundraising for Israeli families in need spread from Lucerne to Milan, to Antwerp, then London, and eventually to New York.  Today, there are fifteen fundraising chapters in the New York area alone, and fifteen additional chapters throughout the US, Canada, South America, Europe and Israel.

Matan B’Seter Bambi’s current annual budget of $1.3 million now helps over 400 Israeli families who are not only impoverished, but who are undergoing a severe medical or social crisis.

“Poverty in Israel is a major social problem, with 25% of Israel’s population and 36% of Israeli children living under the poverty line.

“Our families cannot afford even the basic necessities of life– food, rent, and utilities–let alone the extra costs of their medical care. For example, the cost of many important medications are not totally covered by the National Health Insurance.  Dental work is also not covered, nor is medical equipment such as wheelchairs, eye glasses, and hearing aids.

“We do our upmost to keep overhead very low. Almost all of our work is done by volunteers.  We work from our homes, saving the expense of an office.  Out of the total donations, only 3-4% is used to cover travel, postage and professional accounting expenses. This allows more money to go directly to the needy recipients.

“We are careful to review each person’s medical and social documents before offering assistance, and we monitor our families for changes in their circumstances.  In complex cases, we seek rabbinical guidance and our tzedaka has been endorsed by many prominent rabbis. We provide our aid with the utmost sensitivity and dignity for the recipients.”